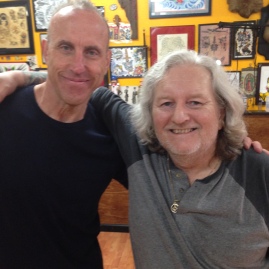 Tattooing and the human race lost a giant today in Dave Gibson who died unexpectedly only 7 months after losing the love of his life, Debbie, his wife of 28 years. He had just returned from Catalina island where he was spreading Debbie’s ashes. His loss will be felt much wider than those he inked. He had a lot of friends. I’m honored to have been one of them.

I met Dave when he worked at Bert Grimm’s shop at the Long Beach pike.  It’s world-famous because of its namesake and because Long Beach was a major port during the wars and the sailors came in to Bert’s shop for elaborate tattoos of ships, cannons, flags and guns.  Check the link for photos and history.  It was an iconic and historic place and if you were going to get a tat, well…

I already had one, a crown of thorns with three nails in the middle.  I had gotten it at a shop somewhere on Harbor Blvd. near Disneyland by a woman named Barbara around 1982.  Tattoo artists often chuckle about initiates asking for small first tattoos.  I made the same mistake and was ready to fix it.  My friend Chris Brigandi suggested we go to Long Beach.  Dave was there and while we were talking, I noticed he had a tattoo on his arm of the Rick Griffin flying eyeball. Rick was also a friend and had designed the Undercover logo, did all the lettering on the God Rules album cover and even sang background vocals on a couple songs under the name “Joe Christian.” 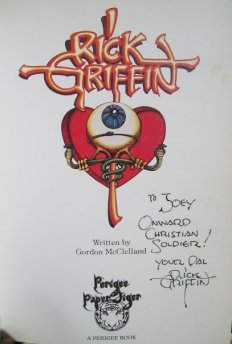 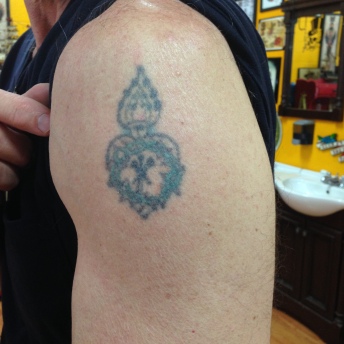 Dave was a huge fan of Rick’s work and I mentioned to him that we knew Rick, told him the story and we had a lot of conversation about that. Dave modified my small crown of thorns and converted it to a sacred heart (shown above, but over 30 years later).  A little later, around 1985 he did the tattoo of the three crosses featured on the Branded album cover. He always wanted to add to that one – a purplish, cloudy turbulent skyscape behind the crosses, but we never got to it. We all brought some of our friends out to see Dave too, including musicians like Canadian guitar-legend Jim Chevalier to get inked. 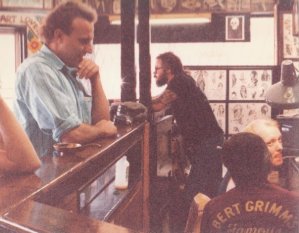 Jim Chevalier in the chair, Dave with his back to the camera.

When we were working on the Branded album, the idea of using a tattoo for the album cover made a lot of sense, especially with the title. It had multiple meanings, positive and not-so-positive. I asked Dave how he felt about using the tattoo and he liked the idea.  We also asked him to do the lettering for the album cover, which he agreed to do.  I initially thought we might do all of the copy by hand but it was just too much so we agreed that it would pretty much be just the album and song titles.  These prints are mockups and drafts Dave did for the concept on rice paper.

Years later (2015) thanks to social media of course, my friend Herb Grimaud from the band Stranger Kings sent me a note saying that Dave had a Facebook page. I enthusiastically looked him up and we reconnected and exchanged some emails. He was living in Stockton and working out of a shop called Quarter Horse.  He was semi-retired.  I told him I wanted to get my sacred heart tattoo touched up and he agreed to do it if I was ever in town. He also told me he had an interesting story about the three-crosses tattoo to tell me.

A while later on a trip to Napa to visit Bill Walden to talk about his record, I made the drive down to Stockton.  Dave and I had our reunion and talked for a good while. That would have been enough.  It was so good to see him again. Dave was an atheist as well and he was “…glad you’re not into the zombie guy anymore. Religion is destroying the world. I ain’t down with any judeo- christian- muslim hype. Yaweh is clearly a war god with far too many ego problems.”  (His exact words). We had a lot to talk about. He drew the new sacred heart on a yellow pad, sketched it out on my arm and started working. He told me he had been working on engraving in metals, on guitar pick guards, dobros, zippo lighters, belt buckles, all kinds of things. His engraving style is apparent in the sacred heart. 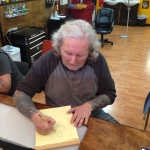 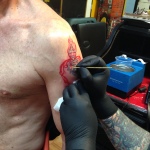 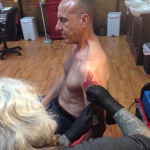 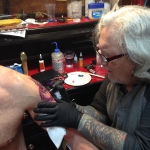 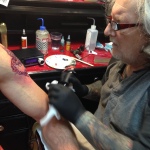 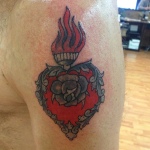 It turns out that when he was working in the south (I’m pretty sure it was Mississippi, but someone can correct me if I’m wrong) a guy walks in one day with an album cover.  He holds it up to Dave and says, “Can you do a tattoo like this one?” It was the Branded album cover and Dave about fell out of his chair. The guy had no knowledge that it was Dave that actually did the tattoo.  He had been waiting to tell me that story ever since.

We took photos and said our goodbyes when he was finished.  He told me he had health problems and was done working full time. It was the last time I saw him although we’ve exchanged emails and social media interactions ever since.  He had a nephew studying music, he told me about pieces he had that he was selling, we talked about Rick Griffin, Sam Harris, guitars, religion and religious history, which was a hobby of his and magazines he had been featured in. 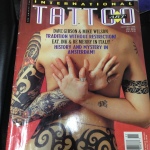 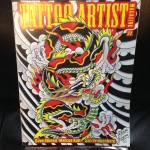 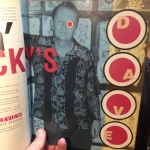 Stockton is not exactly close to anywhere I frequent and even though Dave and I were in regular contact, I had to find a parlor in Portland where I spend much more time lately. The crosses were over 30 years old and needed to be covered.  They had also lost all meaning to me other than the history of the record.  Everything must change. It was my own good fortune and research that brought me to a shop named Fortune Tattoo run by Ms. Mikki (her chair is the one by the window). She actually knew Dave also and had worked at Bert Grimm’s (correct me if I got it wrong, Mikki!).  Dave had tattooed her neck. We hit it off right away too and she’s done a couple of my tattoos.

I asked her during one of those sittings about touching up the sacred heart a little that Dave had done (colors were already fading from scar tissue, etc.). She looked at it and said she knew what to do.  On July 7, not even two weeks ago I went in to see Mikki to get the work done.  When I asked what she thought she would do, she said she’d “make it pretty again.”  I asked if she was going to add to it or change it and she looked at me and said, “No, it’s a Dave Gibson!”  She honored his work. (Anyone in Portland, and even anywhere near Portland should visit her shop.  She is a badass tattoo goddess).  It’s some kind of serendipity that we were channeling him that recently. 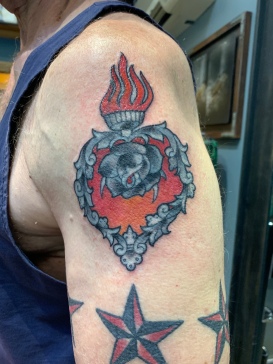 Dave and I were not best friends but he is literally etched into my body. He is part of my story and part of Undercover’s story. I was part of his in some small way too. He was a sweet, talented man, devoted to his wife and his craft, and I will miss him. Farewell, Dave. May the rainbow always touch your shoulder. 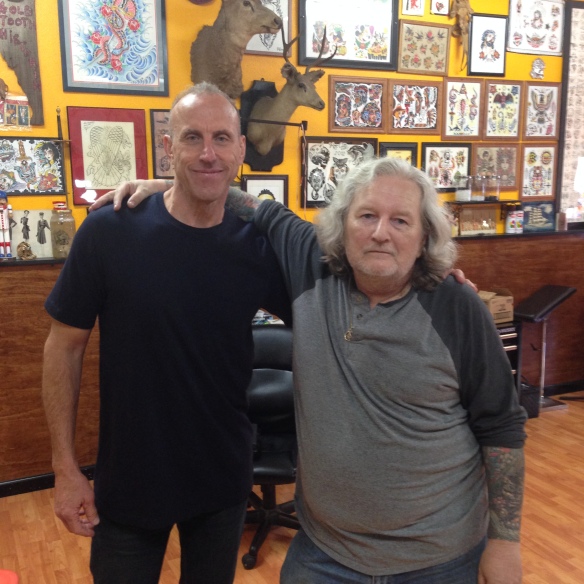